Today’s issue of #100DaysofWomeninFilm focuses on the career of Zinovia Arvanitidi, a Greek composer who has written music for theatrical plays, short films and animated feature films. Arvanitidi’s most notable projects are the scores for the Russian tv series’ Golden Horde, Blue Rose, and Godfather.

If you are interested to learn more about Arvanitidi’s eclectic inspirations and her wise advice for women composers, look no further. Here is day 27 of #100DaysofWomeninFilm. 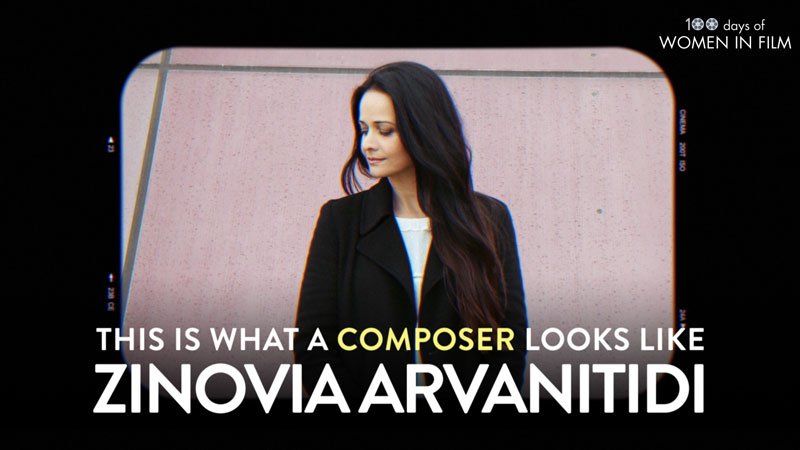 1. Can you introduce yourself and tell us about your recent projects/work?

My name is Zinovia Arvanitidi, I was born in Athens, Greece and I am currently living in Bordeaux, France. I am a composer for film and tv series and also a performing artist releasing my own albums. My latest score was for the Russian tv series Golden Horde, a fictional epic drama/romance set in the medieval Russia and Mongolia. It was a very challenging work but rewarding as well as it received an award for Best Music and Sound at the Mediamixx Festival of 2018.

The same year I also released my second solo album “Ivory” via the Singapore-based Kitchen Label. It’s a very personal and intimate-sounding piano work which was embraced by the audience and received remarkable reviews from the press and from fans all over the world.

Since then I got involved in various projects which were postponed due to the pandemic but hopefully this year we will get back on track.

2. Can you walk us through your composing process?

When I write for a film or series, I want to get as much information about the story from the director. It’s more essential for me than just reading the script because through several conversations I can pick-up details that are not necessarily written on paper. I like to feel the vibe of the story and understand the vision of the director through their own voice. It’s a process that is very powerful and very inspiring for me. It can initiate melodies in my head from the very beginning which will then lead to the development of music themes. Throughout the first days I compose most of the music in my head while doing a lot of research on the characters I write for. It’s important for me to be completely immersed into the story because I instinctively approach everything with empathy and intuition. When the main themes/ideas are approved by the director/producers I get into the more technical aspect of orchestrating, recording, editing, mixing etc.

3. What styles of music influence your work the most? And who are your favorite female composers?

I listen to a lot of music genres but my work is mostly influenced by classical, jazz and electronic music. Among my favorite female composers are Anne Dudley, Eleni Karaindrou, Lisa Gerrard and Rachel Portman.

4. You are originally from Greece, are currently based in France, and have composed for several TV series in Russia. How has this multicultural background shaped your art?

I feel that my music evolves with my experiences and the fact I moved to France has definitely played a part on my inspiration and also my confidence in the way I compose. A lot of my influences are French (Debussy, Ravel, Satie, Georges Delerue, Maurice Jarre, Gabriel Yared, Alexandre Desplat) and I feel I am in a very inspirational environment here.

5. What advice do you have for women looking to pursue a career as a film composer?

It is the same advice I am also trying to fully implement in my professional life. Making a career in music, including film composing, is very difficult so it’s helpful to have a backup plan to support yourself financially before you start making money from your music. Work hard, be humble, have patience, exercise perseverance, and in the beginning be prepared to make mistakes and to be embarrassed (a lot!). Eventually you learn a great deal from them. Be prepared to deal with failure(s) which sometimes may be more than the successes but when those do come it’s immensely rewarding. Don’t be afraid to develop your own artistic voice. Try to be surrounded by honest and supportive people, avoid the toxic ones, and learn to be immune to nonconstructive criticism. Always remember that the purpose of music in film is to serve the story and nothing else. Let your passion and determination be your compass and get inspired by other women like the Oscar-winning Hildur Gudnadottir who said to all the women who hear the music bubbling within: “Please speak up, we need to hear your voices.”