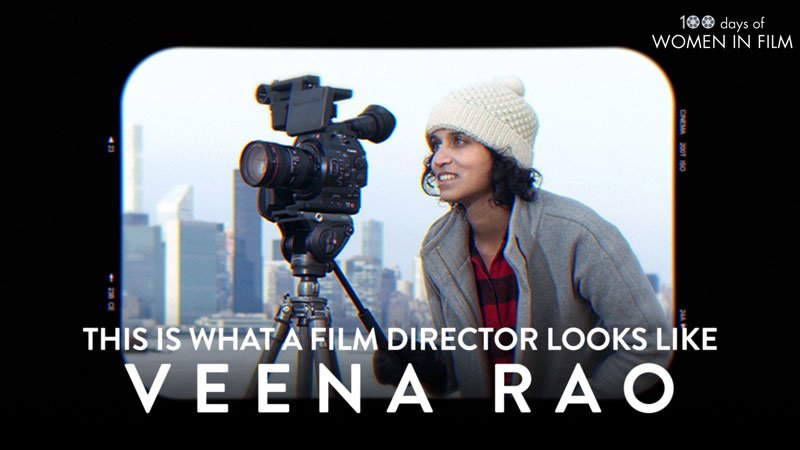 Welcome back to #100DaysofWomeninFilm. For day 8/100 I would like to put the spotlight on New York based filmmaker Veena Rao, a master of documentary shorts.

I first became acquainted with Veena a few years ago, as I was invited by my friends Mike Ambs and Erica Hampton to join the filmmaker collective The Bureau of Creative Works. Veena was also a member. Fast-forward a few years, I had the pleasure of working with Veena on a short film commissioned by Lottie Dolls for their Inspired by Real Kids campaign. I worked as producer and editor and hired Veena to be the cinematographer for one of the episodes; since then, Veena has become a friend.

I’m in awe of Veena’s talent as a filmmaker. What I love the most about her documentary shorts is that she elevates what most people might think as ordinary… and turns them into something magical, filling the viewers with a sense of wonder.

Veena’s filmmaking style makes me think of cinéma d’auteur: all of her films have an innovative, coherent, singular style – from the cinematography, to the storytelling, editing and sound design.

If you have an hour of free time today, I would recommend skipping Netflix and watching instead Veena’s documentary shorts, which are all available on her website. Rebuilding in Miniature is the portrait of Ali Alamedy, a displaced Iraqi artist who creates intricately detailed dioramas of places he has imagined but has never been. The Honeys and Bears makes you discover a synchronized swim team from Harlem, New York, made up of seniors 55 years and over. Mumbai Mornings tells the story of a gold polisher who becomes an ultramarathon runner.

Veena’s films have screened at festivals around the world, they’ve been featured by the New York Times Op-Docs, the Atlantic, National Geographic (just to name a few) and in 2017 Vimeo selected Veena as one of “10 groundbreaking women in film to watch.”

Without further ado, here is a Q&A I did recently with filmmaker Veena Rao:

I’m a filmmaker based in NYC. I love making portraits and finding a way to reveal the extraordinary in the everyday. I have a soft spot for one of the first films I made in college – Mrs. Henderson’s Kids, which was about my second grade teacher and her collection of over 2,000 dolls. I loved reconnecting with her after all those years and exploring ideas about girlhood, motherhood, and old age with her through her collection.

I started in photography because I loved the story a single image can tell and loved watching images magically appear in the darkroom. When I was introduced to film during a class my freshman year of college, I quickly became fascinated with the possibility of film and exploring storytelling through it.

Trust and believe in yourself and your voice. Also, know that filmmaking is a collaboration, so seek out people whose work you admire and start making things!

I really admire the late Agnès Varda – she was a true artist who embraced her curiosity and used the medium of film to tell stories full of wonder, beauty, playfulness and compassion. I think her filmmaking marries form and content in a beautiful way, and love that her work spans fiction and documentary filmmaking, as well as photography and installation.

I recently saw a beautiful short film called Mizuko by Kira Dane and Katelyn Rebelo, which I loved.

My completed work can be seen on my website. I have a few projects in the works and and hope to have something new to share soon.