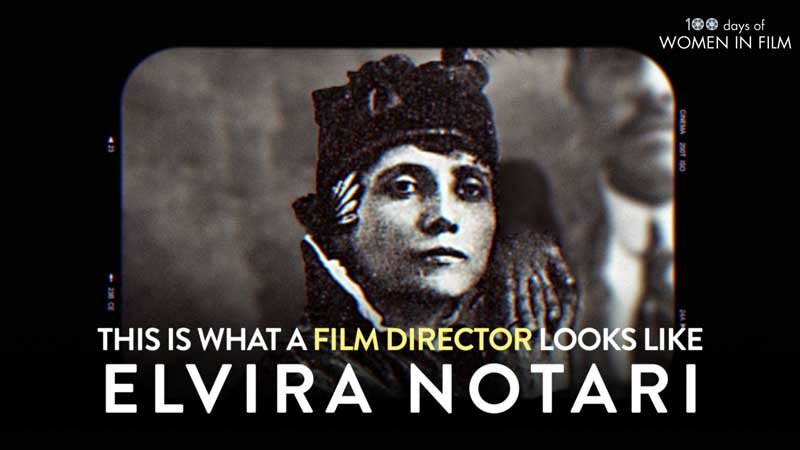 The first issue of “100 Days of Women in Film” celebrates the work of pioneering filmmaker Elvira Notari.

Notari – born Elvira Coda in Salerno, Italy, in 1875 – was Italy’s first female director and one of the most prolific of her era. In between 1906 and 1929 Notari directed more than 60 feature-length fiction films and hundreds of documentaries and short films. Notari was also the first female filmmaker in Italy to have founded her production and distribution company: Dora Films, along with her husband Nicola. The couple worked together: Nicola as cinematographer and Elvira as screenwriter and director. “Dora Films” is named after their daughter Dora; their son Eduardo acted in many of the productions.

According to her Wikipedia page,

The feature films made by Notari were often based on Neapolitan (especially middle-class women) forms of drama. Notari shifted to the sceneggiata, a hybrid theatrical form drawing on popular dramatic songs and the variety stage, by the early 1920s, and shot on the streets of Naples using non-professional actors. The amateur actors gave realistic vibes to her films, while each of Notari’s scenes utilized the street as a natural stage filled with lights, crowds, and their voices alike, rather than shot in a Cinecittà. Notari defined her passionate dramas as part of a series defined by her as grandi lavori popolari (“great popular works”).

Notari’s body of work was considered to be a precurson to Neorealism.

I also loved this tidbit from Notari’s Italian Wikipedia page:

The production was carried out with a pioneering technique: often the frames were coloured by hand, individually, in a rainbow of shades, other times by machine, with uniform colours, variable from scene to scene according to the feelings expressed, blue for melancholy, red for anger, etc.; the images were synchronised with music and singing, performed live […], so much so that we can talk about a form of multimedia show.

A pioneer in every sense of the word: her technique reminds me of Soderbergh’s Traffic (2000). Soderbergh used color filters to differentiate story lines.

Last but not least, Notari’s work is also notable for its focus on the female perspective:

[Notari] had a tendency of portraying the “dark woman”, the femme fatale, a woman who deviated from the norm. There was a focus on the female body as well as female fantasy, which is an aspect of Elvira Natori’s work. In her works ‘Nfama! and A Piedigrotta the female leads are described as the “unruly female figure” the films go on to portray the struggle of these women. One of the other themes in her films, that present these types of women, is desire. Men desiring women, women desiring some sort of feeling or emotion.

And now, here is “A Santanotte” directed by Elvira Notari:

I must thank Twitter user Erika Marconato for bringing to my attention Notari’s work. I recommend you follow her on Twitter: in addition to making great GIFs, Erika also tweets about #unadonnaalgiorno (a woman a day), putting the spotlight on notable women – often forgotten by history – every single day.

To find out more about Elvira Notari, check out:

I also made Elvira a GIF.

Introducing 100 Days of Women in Film