Day 18/100 of 100 Days of Women in Film celebrates the work of Indian-American filmmaker Mira Nair. 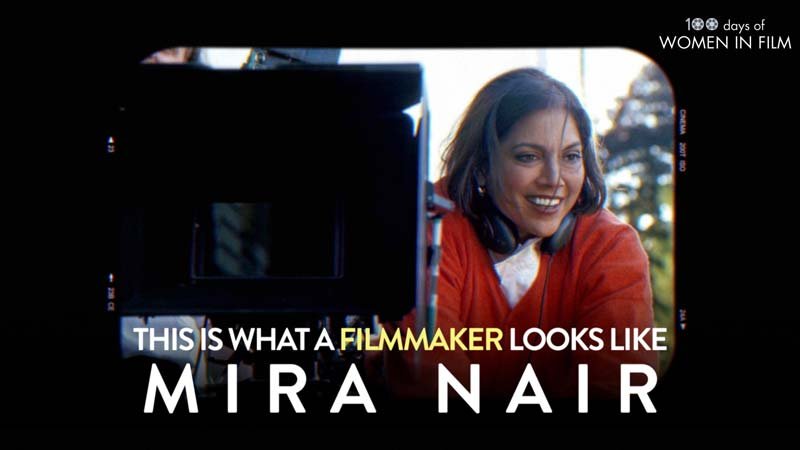 Last week Nair participated in Array’s tweet-a-thon and shared brilliant advice about filmmaking, answering several questions that I typically ask filmmakers I interview for this project. So I thought it would be a great fit to feature her here today. Spoiler: she even answered one of my questions on Twitter!

Before we get to Mira Nair’s filmmaking advice, let’s revisit her life and impressive career thus far.

Mira Nair: A Life in Pictures

Mira Nair is one of those rare filmmakers who effortlessly move between documentary and narrative filmmaking, independent films and Hollywood productions. She’s arguably one of the most successful and most prolific female directors working in the industry.

How did she get started working in film?

Nair was born in 1957 in Rourkela, Orissa, India (present-day Odisha). She grew up in India, studied sociology at Delhi University, and decided to continue her studies abroad. She moved to Cambridge, Massachusetts, to study at Harvard University, after the school offered her a full scholarship. While there, Nair began making documentaries… and also occasionally acted in theater productions (she even won the Boylston Prize for her performance of Jocasta’s speech from Seneca’s Oedipus).

Nair’s experiences in acting and documentary filmmaking are the keys to the success of her first fiction film: Salaam Bombay! which Nair directed and co-wrote with her friend Sooni Taraporevala. The film explores the lives of street children living in the slums of Bombay; even if the film was scripted, it featured genuine street children. The film won 23 international awards, including the Camera D’Or and Prix du Public at the Cannes Film Festival in 1988; it was nominated at the Academy Awards for Best Foreign Language Film and the New York Times in 2011 put it on the list of “The Best 1,000 Movies Ever Made”.

Salaam Bombay! was followed by Mississippi Masala (1991) – a film written by Sooni Taraporevala, starring Sarita Choudhury and Denzel Washington, which explored the interracial romance between an Indian immigrant and African American in the United States. The film was another critical success and won several awards.

In 2001, Nair’s Monsoon Wedding – both a critical and a box office success – was awarded the prestigious Golden Lion at the Venice Film Festival.

Her most recent film is Disney’s Queen of Katwe (2016) a biographical drama starring David Oyelowo, Lupita Nyong’o, and Madina Nalwanga. The film depicts the life of a girl living in Katwe, a slum of Kampala, the capital of Uganda, whose life is transformed when she learns to play chess.

In addition to filmmaking, Nair has also been a lifelong activist. In 1989, she established an organization – the Salaam Baalak Trust – to rehabilitate the street children who appeared in Salaam Bombay! In 2005, Nair created another non-profit in Kampala, Uganda (the location where she would film Queen of Katwe): the Maisha Film Lab. Its mission is to train and mentor emerging East African filmmakers. Oscar-winning actress Lupita Nyong’o – who stars in Queen of Katwe – is an alumna of the Maisha Film Lab (class of 2006).

And now, here are some words of advice that Nair shared last week during Array’s tweet-a-thon. The first question she answered was actually mine (!)

What’s your #1 advice for first-time directors?

MN: Learn your craft. Prepare to be lonely. Cultivate stamina.

What elements in a script help you as a director?

MN: Every script should bind in layers – never just one thing – humor, loss, desire – it all comes together so long as there is purity of intention.

MN: Truth is inevitably stranger and more powerful than fiction. The best electricity is to combine great visual storytelling with the unpredictability of truth. Kampala is my home for 30 years: Queen of Katwe was my chance to show my love.

If you could thank one person for your career path who would it be and why?

MN: My Bengali sitar teacher who told me to focus on one thing – not scatter my energies in too much else – the reservoir of our art form runs deep, it cannot be perfected on one plane only.