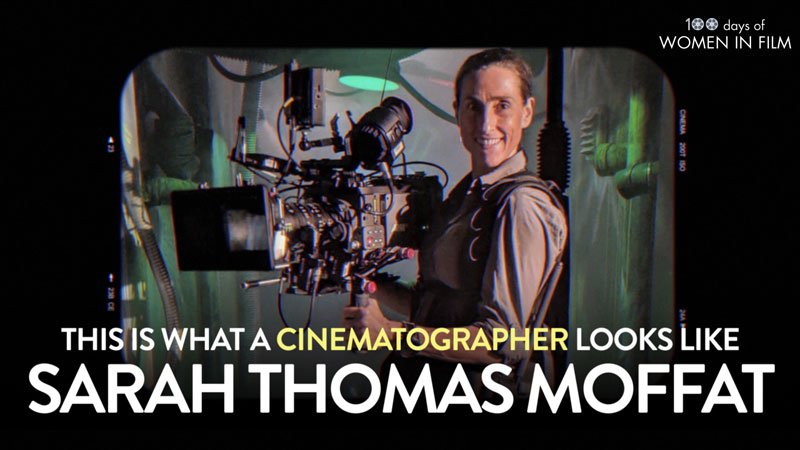 Happy #FemaleFilmmakerFriday everyone – and welcome back to #100DaysofWomeninFilm.

Day 9/100 puts the spotlight on the life and career of Canadian cinematographer Sarah Thomas Moffat.

A couple of years ago I started making GIFs of female cinematographers with the mission to increase their visibility in search engines and on social media sites. Thanks to this project, I came into contact with Sarah Thomas Moffat. While checking her website for the first time, I had to do a double take. To my great delight and surprise, Sarah had worked on a short film that is amongst my favorites of all time. So much so that when I had first seen it 5 years ago, I had saved it to my computer. I routinely watch it from time to time to be inspired and uplifted. The film – How to Age Gracefully – is my go-to pick-me-up.

I can’t wait for you to discover Sarah’s work and career trajectory. Here is Sarah Thomas Moffat, in her own words. 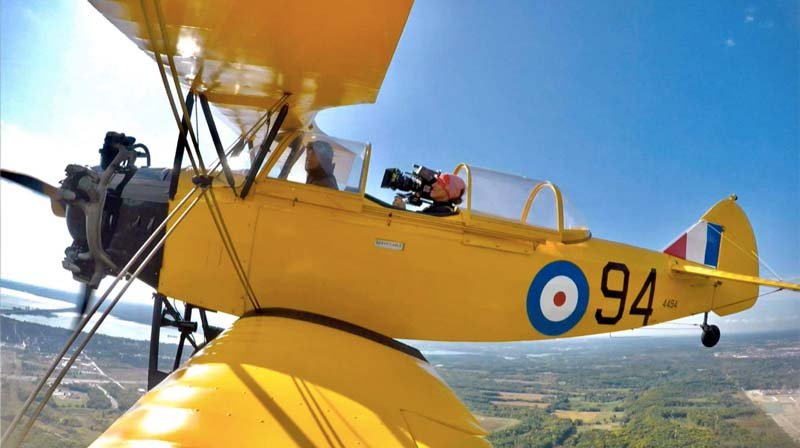 I am Sarah Thomas Moffat, a director of photography. Scotland to Canada is where my life began, I grew up in Toronto when it was a small city with an amazing multicultural population.

Photography was something my father really nurtured in me from a very early age. He noticed I was interested in his cameras as toys, vs dolls. By the age of 10 he was deliberately teaching me how to shoot B&W stills, and use an aperture, shutter speed and film ASA. I still have those negatives, and prints we made with his hand writing on the back of the prints… they are very special to me, even more so because when I entered into my film career as a student Production Assistant, he passed away on my very first day at work. That’s how it all began for me.

What inspired me was photo journalism and paintings. My father always had National Geographic magazines around, and my mother had a great collection of historical books full of the great painters. DaVinci, Rembrandt, Monet, O’Keefe, and so many more… I would look at those images constantly as a child… I didn’t really know what I was looking at then, I was just drawn to the drama in them. Ansel Adams was one photographer whose work I was also drawn to, and I learned he would sit still for hours in one place, waiting for the light in nature to be just right before making one photograph. All of my work from documentary to narrative stories has been influenced by those I observed as a child.

When I was a teenager, my father continued to print my rolls of film and critique the images that came back, he said I had a “natural eye”. He’d teach me how to hold a camera, and also hold my breath until the right moment came into the view finder, and then CLICK! Exhale! One photograph at a time, and it had better be worth it as it cost money back then! I learned to care about every image I made. I also realized the connection of emotion to an image then... I started to give those pictures to people, and experienced their reactions to my photographs… that’s when the real lightbulb went on. That’s when I knew this was bigger than metal, glass and film… this tool, with my eye, had the ability to create empathy. That was a powerful moment for me.

I am proud of all of my work, as I have worked very hard to make everything I have done. Nothing has come easily to me, from indie freebie films, to international documentaries, reality tv adventures, and feature films… I have truly put my blood, sweat and tears into all of my work because I am passionate about my craft, and care about the story.

There is one short piece that stands out called, How to Age Gracefully. It was a unique project with minimal resources, for a radio show called Wiretap. The show was going off the air after 11 years at CBC Radio, and had come to be known as a show that Canadians felt lovingly for. So a branded content creator named Andrew Norton agreed to pull together a farewell video for the show to put on their website. He invited me onto the project as I was also working for CBC, and could access some other gear. We borrowed a mix of cameras and lenses, got into a wee studio at CBC in Toronto, I lit and set the scene alone for 2 hours, had 1 volunteer camera assistant, no other crew, and then we filmed non-stop real people for 2 full days. Because of the short turn around time, we had no bigger vision at the start, beyond the story content itself and filming of real people. This gave me some creative freedom, quickly and resourcefully, I created a mood and look that ended up serving the story and edit quite well. Within its first 24 hours of online release at the time, it had reached thousands of viewers. We’ve all lost count over the years, yet CBC social media staff let me know that they use this as the success story example of why video content is most powerful, as it is now into millions of viewings across the globe.

It was a very touching piece, and the video as a whole production demonstrates that passionate, skilled collaborators can make something beautiful with empathy, while impacting humanity for better. For me personally, I was very honoured to receive many positive messages from all over the world specifically about the cinematography. I did my job, and did it as best I could with no crew, but 1 AC, a mashup of gear, and my resourceful wit. Job well done, I can say.

My advice… Believe in yourself. Whatever your craft may, never give up. Even when you feel like you may not have much to work with, do something. Always do something. Make something out of nothing. Look at your tools, and put them to work. Use your creativity. Be open to its evolution in the moment. Trust yourself. Let go of the outcome, and simply create. That is sometimes, the most beautiful and effective filmmaking of all.

Right now, Ava DuVernay is the most inspiring filmmaker of all to me. Not only does she write and direct, she is producing, exec producing, and most importantly she is LEADING! She is setting a new stage right inside Hollywood for the new way forward. Beyond the stories she creates on large studio platforms like Wrinkle In Time and When They See Us, she has created Array Now. Array Now is supporting people of colour and women to get their content made and seen. She is creating access, opportunity and visibility. The three most important pillars of a successful trajectory for any career. And best of all, she is doing it with class. She’s setting a new standard for behaviour, she is being the change we all want to see. I would happily and gratefully collaborate on anything Ava is doing, any day.

You can check out my personal website anytime, as I’ll be making updates in the coming months with new content on the way…