Hello and welcome back to #100DaysofWomeninFilm!

I hope you had a lovely weekend.

This week will bring a mix of profiles of pioneering women in film and professionals working in the industry in the present day.

I’d like to start the week with a quick post that puts the spotlight on who is arguably one of the most famous experimental filmmakers in the history of cinema: Maya Deren. 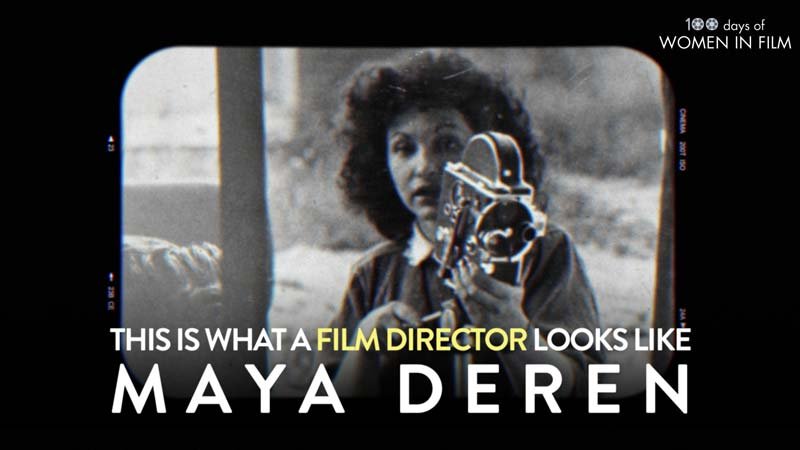 Deren (born Eleonora Derenkowska in Kiev, Russian Republic – what is present-day Ukraine), was a true polymath who reached excellence in many art forms: from writing (an accomplished poet, film theorist and author), to dancing (she was a dancer and expert choreographer) and visual arts (photography, film directing, and editing).

Deren is best known for her 14 minute experimental film Meshes of the Afternoon (1943), which she wrote, produced, co-directed, starred in and edited. Deren’s second husband Alexander Hammid co-directed, co-starred in the film and shot it.

I remember watching Meshes of the Afternoon during my first year of film school – its mysterious, dream-like quality left a profound impression on me. It was unlike anything I had seen before.

It all but redefined cinema’s capacity for suggestive and imagistic storytelling through its radically intuitive editing strategies and inscrutably gothic imagery.

Her originality went beyond mere camera and editing techniques: Deren was a strong proponent of “personal filmmaking” in which “the artist crosses the threshold from that which already exists into the void where she creates… highways through the once empty spaces over the abyss.”

In the 1940s and 1950s, Deren would openly criticize the Hollywood film system, saying “I make my pictures for what Hollywood spends on lipstick.”

In 1946 Deren was awarded a “Grand Prix Internationale” for Meshes of the Afternoon at the Cannes Film Festival. The same year, the filmmaker was the recipient of a Guggenheim Fellowship for “Creative Work in the Field of Motion Pictures”.

Film historian Georges Sadoul called Deren “Perhaps the most important figure in the post-war development of the personal, independent film in the U.S.A.”

Deren’s most famous films were produced in the 1940s:

(You can easily find Deren’s films on YouTube – including Meshes of the Afternoon – but most videos have music added by fans.)