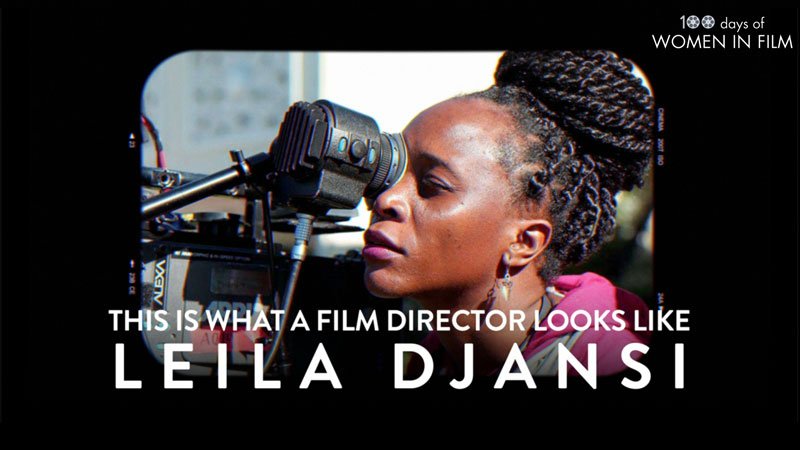 Welcome back to #100DaysofWomeninFilm, a daily celebration of women working in film and TV.

It’s incredible how we’ve already reached day 10 – we’re 10% of the way through with the series. It’s a real pleasure to research and bring you these stories; the project is also giving me an opportunity to reconnect with people in my network – and to get to know new, talented individuals. So far, I’ve brought you stories and interviews with directors, cinematographers and editors. I am about to expand the Q&As, featuring producers, festival directors, sound engineers, colorists and set designers. Stay tuned for their interviews.

And now, for day 10/100, I’d like you to meet Leila Djansi, an award-winning writer, producer and director, originally from Ghana and now based in the United States.

Still in her 30s, Djansi has already directed 6 feature-length films, with one more in post-production and a new one just announced. This is an incredibly rare feat for female directors. In addition to her film work, Djansi has also written and directed episodes of the television show 40 and Single.

I’m delighted to share with you this Q&A I did with Leila Djansi. And please, make sure to check out the links at the end of the post: they will take you to Amazon and Tubi, where you can watch her movies.

Can you introduce yourself and tell us about the projects you’re most proud of?

My name is Leila Djansi, an LA based filmmaker.

I’m not sure I can use the word proud yet. But, my earlier work Sinking Sands which is streaming on Tubi remains one project I like because I was able to test my visual voice. Where Children Play is another one that I’d point to. When I make a film and a number of people tell me “you told my story”, that’s all the success and validation I need. I received a lot of emails and notes when that film got released. Many victims of abuse found it cathartic and that was my intent when I set out to make that.

Growing up, I escaped the effects of school bullies by living in my head. My mom telling us stories helped too. I would escape into these fantasy worlds of quintessential villages with a river running through, snow white forests and of course, a prince on a horse. I was all set to become a doctor, but the deeper I delved into science, the more lost I became. So it just made sense to do what had always brought me peace.

It’s important to speak up – but it’s more important to be heard. You can speak out all you want but if the right people are not listening, you might as well be going to the stream with a basket. I’ll tell my younger self to pick my battles and be strategic.

Mira Nair. We were not raised with television. It was books and audio books. The very first movie I remember watching was Clash of the Titans, the 1981 version. I was about 8 years old. I began to enjoy movies but none of them were reality. My father introduced me to the boxing and the Bond franchise but I never saw myself in any of them. Then I watched Mira Nair’s Mississippi Masala and that changed everything. I saw brown people. The romance between Demetrius and Meena formed the basis of all my prince charming fantasies, by the way. I realized Mira was a woman. I didn’t see the significance in that moment because I was growing up with a very strong mother in an almost all female home. I had a voice. Even as a child, I had a chauffeur who was male, my father doted on me, so I didn’t think being a woman was a limitation. It wasn’t until I got involved in the film industry in Ghana – where the size of my breasts, the hue of my skin and the flawlessness of my face predetermined opportunities available to me – did it begin to resonate. Mira made that movie all those years ago and she wasn’t even white! I applied for a scholarship, got it and left Ghana to study film in the USA.

Sofia Coppola’s The Virgin Suicides and Patty Jenkins’s Monster. The plots are very engaging and involving, and in their own way, the female leads are tragic heroes.

My films are on Amazon, Tubi, UMC.tv, Vudu, etc.