Day 19/100 of 100 Days of Women in Film celebrates the work of director Aya Tanimura.

I had the immense pleasure of doing a Q&A with her. But before we get to her interview, I invite you to watch Aya Tanimura’s director reel: 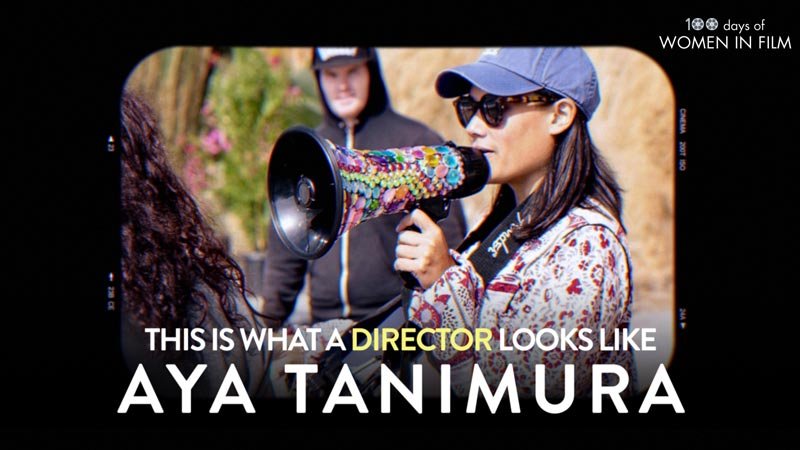 Can you introduce yourself and discuss the projects you’re most proud of?

My name is Aya Tanimura and I am a Japaralian (half Japanese, half Australian) currently residing in Los Angeles.

My work really spans a lot of realms! Most of it is in music videos where I create visuals for artists such as Katy Perry, Miguel, Charlie Puth and Alessia Cara but also for all of Disney and Pixar’s tentpole movies which is always fun (trying to match live action visuals with animated footage is challenging and makes you think differently than you normally do, it’s fun!).

The other most prolific part of my career is commercials… I always thought doing car commercials would be fun (you get to play with all the fun toys when creating them) but in this industry you really get pigeonholed. My first spots were color blocked, bright, cute, fun spots with Katy Perry so now that is all people think I can do (ugh)!

Then I dabble in short films that are a real mixed bag – stop motion animation, experimental and narrative.

Despite being in different genres of filmmaking, I think all my work tends to have a common quirkiness to it that make them distinctively me.

This year I am moving into TV – I recently booked my first episode that was supposed to shoot in March but production shut down due to Corona.

In February I completed a stop motion film collaboration with the artist Alexa Meade called Reframe of Mind. This labor of love was created over the course of two years and explores the process of creating art.

I was non verbal as a child so spent a lot of time creating worlds and stories through visuals – painting, drawing, photography. I think that this led to my natural tendencies to communicate through visual art. Over the years, having experimented with many mediums, I grew to love film the most.

It sounds cliché and I almost cringe writing this but really enjoy the process and the journey and don’t compare yourself to others. It’s so easy in this business to be hard on yourself when you see others forging ahead in the same career path as you. It is also really hard to not get frustrated when your projects and career are not moving along at the pace you want them to be, but when you look back, it all makes sense as to why certain things didn’t happen or you didn’t book particular things… what’s waiting for you is what’s right for you and trust the universe (even though sometimes you want to kick it in the balls!)… I am still heeding this advice… specially during this shutdown!

There is this really amazing director, Liz Friedlander, who I really look up to and admire. Not only is she a really interesting and talented director/ writer who has worked her way from music videos, to film to TV… she also has three beautiful children who she is raising at the same time – two full time jobs.

Liz came up in the 90’s which was a much more difficult time for women in film – hearing stories of women working in music videos during those years will humble you! The strength, tenacity, drive and talent needed to simply survive the business back then – let alone ascend – was immense. A lot of women left (understandably). Some that hung on had to fight so hard to get to where they are now, that they are very closed off (also understandably). But Liz is a champion for women. Despite her work schedule and her family, Liz gives her time to develop and nurture female directors with programs such as NBC’s Female Forward.

I really hope that I can be a tenth of the director and human that Liz is. I started in music videos and look to Liz and the way she carved out her career, family and activism to try to do the same.

There were so many great film directed by women last year – it was really encouraging! Some of my favorites were:

When Reframe of Mind starts playing at festivals it would be lovely for people in the area to go and see it! I will be posting on my social media accounts when and where it will screen. In fact most of the word I create I post about on my socials so its the best way to stay up to date! For music video and commercial work you can view it on my website: www.ayatanimura.com

The latest music video Aya Tanimura worked on is truly epic: she directed the music video for the song “Nothing Really Matters” – a collaboration between Dutch DJ Tiësto and Becky Hill. What’s extraordinary is that the video is participatory and was put together during the coronavirus lockdown. Aya Tanimura worked with renowned choreographer Sherrie Silver (“This Is America”) to create a blueprint that people would follow.  After an open call, 500 people from around the world submitted their videos – shot at home, in lockdown – following Silver’s choreography. Tanimura then had just 4 days to create a video out of the 500 clips submitted. Here’s the final video: