After a series of profiles of female directors, 100 Days of Women in Film is putting the spotlight on women in sound: meet re-recording mixer Sherry Klein.

Klein’s list of film and TV projects is truly impressive: she has worked on major TV series like New Amsterdam, Queen of the South, Sons of Anarchy, Burn Notice, Arrested Development, UnREAL, The Shield… and the list goes on and on (145 credits on IMDb to date!).

In this Q&A, Klein beautifully explains what her job entails and why she is so passionate about the profession; she calls her job a “well crafted dance” that merges art and science. Her anecdote about her first professional assignment is truly awe-inspiring.

Special thanks to Reiko Aylesworth for introducing us! 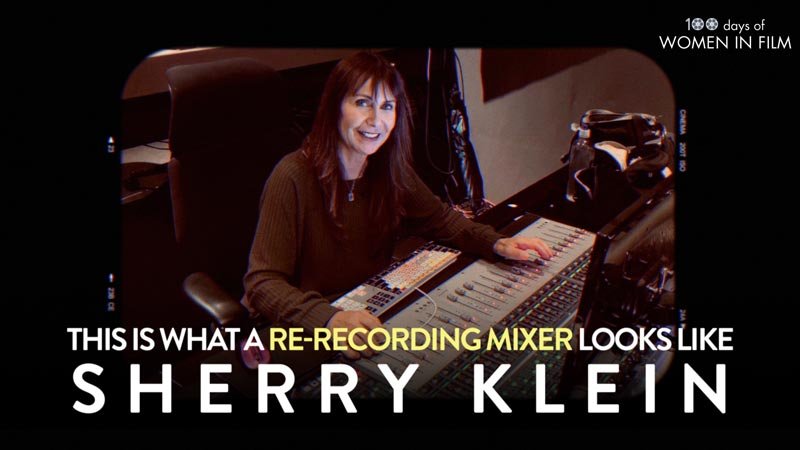 Can you introduce yourself and tell us about some recent projects?

I’m Sherry Klein, a Re-recording Mixer for Television & Film, working with Smart Post Sound located in Los Angeles, CA. For many years my focus has been in television but when time allows I also try and do some indie films.

Throughout my career I’ve been lucky to work on a variety of projects that I’m very proud of. Some of my work can be heard on New Amsterdam, Queen of the South, Sons of Anarchy, Burn Notice, Jaco documentary and going back in years, Thirtysomething.

What inspired you to work in sound?

I started out as a musician and studied arranging and composition at Berklee College of Music in Boston, MA.

Being a musician I was usually on the “other side of the glass” and it wasn’t until I had to record a chart for a term project that I moved to “that other side” and into the control room.

At that time, Berklee’s studio was a very basic 2-track system located in the basement of their main building. Having to sit in that tiny control room and listen to my own arrangement being recorded … well, that was when I first understood the power of sound recording and how manipulating the sound could change everything. That was the first time I became “aware” of sound. I had no idea on that day how that “awareness” would manifest throughout the rest of my life!

I went on to become a recording engineer on the music side, and later after the bottom dropped out of the record industry I sort of “fell into” post-production mixing.

One day I got a phone call from an engineer I had worked with on a number of albums. He asked me if I would be interested in taking on his mixing job for the summer while he was away. He worked at KTTV, which was a local TV station in LA.

I knew most of the gear, the console, multi-track machine, patch bay etc. but he needed to train me in using the time code with their synchronizer… which was a very intimidating paper tape CMX unit. He said don’t worry, I have faith in you and you’ll be fine. So after a day of training he left for his vacation. This was totally a case of putting the cart before the horse.

I really had no idea of what I was getting into but knew that the first show I would be mixing was a popular show called Three’s Company. I was shaking through that first mix, and fumbled my way through it… but he was right and in the end I was fine! 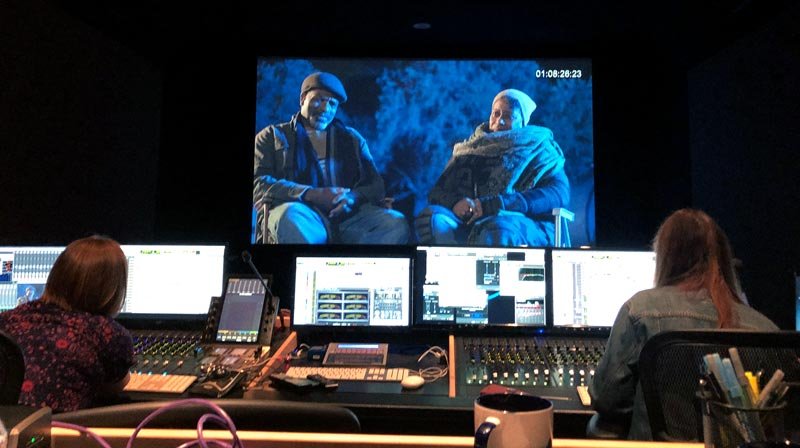 Can you explain what your job entails?

People would always ask me what a re-recording mixer did and I was usually at a loss for a simple concise explanation until I saw this in Wikipedia: “A re-recording mixer is a post-production audio engineer who mixes recorded dialogue, sound effects and music to create the final version of a soundtrack for a feature film, television program, or advertisement.”

But it’s really not that simple because when all these parts come together, it’s a well-crafted dance that merges the technical and creative aspects of sound to bring about a sonic landscape that compliments picture and helps to tell a story.

When I began mixing on a dub stage it was with a 3-person crew, but in past years that’s changed and now most of us work in pairs or alone.

I mix with a partner who handles the SFX (sound effects) and Foley (that’s all the footsteps, movement, silverware etc.) while I work with Music and all things Dialogue (ADR, group walla etc.).

Who are some women in sound who inspire you?

When I began my career in mixing, I didn’t know of any other women in the field to talk with or model my career after. Slowly, I started reaching out to any working mixers who were willing to talk with me and let me observe their methods. Some gave me a lot of encouragement and wisdom, but there were also a few who weren’t very anxious to see me, a woman, make it onto the mixing stage. In fact a few even told me straight out “the dubbing stage is not a place for a woman” Ha…. Didn’t stop me at all!!

Today, the number of women on dub stages has grown and it thrills me to see that. These women who have managed to turn their passion for mixing into a reality are what continues to inspire me.

What advice would you give to somebody coming into the field and your younger self?

Keep persevering at all costs, trust your instincts and push yourself, never be afraid to reinvent yourself along the way; you never know where things will lead you.

My path wasn’t planned by any means, I started out as a musician and it was through a series of unplanned events that I become a re-recording mixer. I consider myself very lucky because every day I get to play in a big sandbox and paint picture with sound alongside of some super talented, crazy people!

The best piece of advice I would have given to my younger self would have been to try and create a good balance between work and play, because there is life outside of the studio. (But, I’m quite sure I never would have listened anyway!)

Today there are a number of wonderful professional organizations that a younger me would have loved to have had available. The CAS (Cinema Audio Society), AES (Audio Engineering Society), WIF (Women in Film), Soundgirls and the recently formed EIPMA (Entertainment Industry Professionals Mentorship Alliance) of which I’m a board member. I’m also very proud to be on the Board of Directors for the CAS and Chair their Student Recognition Award (SRA).

These organizations promote events and opportunities to meet and learn from working professionals. I highly encourage anyone coming into the audio industry to take advantage of these resources!