Reshaping the culture of Instagram, one GIF at at time 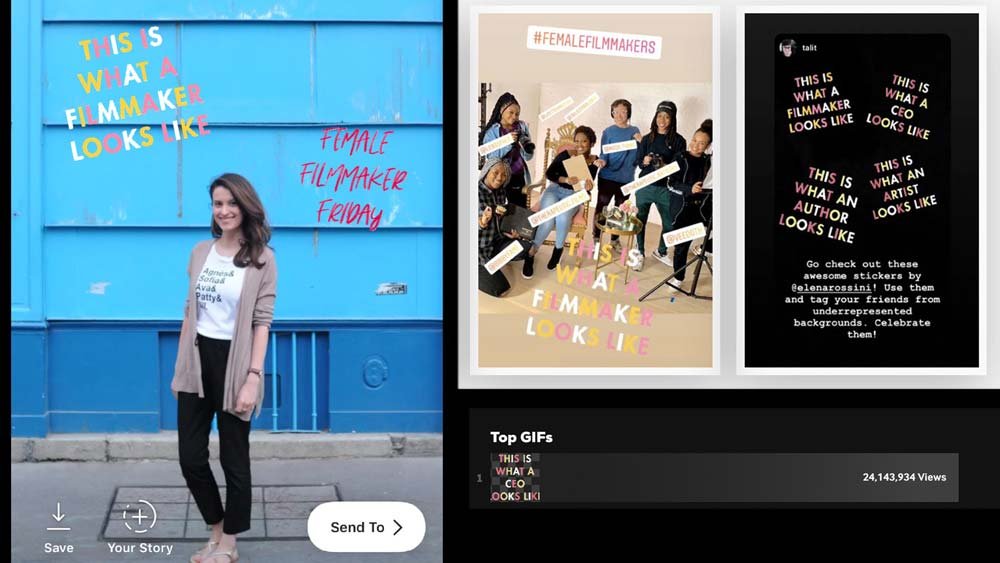 My creative process typically goes as follows:
– I find an issue that frustrates me
– I turn it into an art project, with a positive twist

Last week I started a new initiative that addresses head-on one of my biggest frustrations: my discomfort with celebrity culture and the superficial side of social media.

I’ve got a challenge for you:

And now, name 3 female members of the Kardashian-Jenner family clan.

If you struggled with the first part of the exercise, but easily listed three members of the reality TV family, well, you have proven my point.

The incessant clamor of celebrity culture — and now social media influencer culture, too — is drowning out the stories of remarkable individuals who are making a difference in our world.

I give credit to the Kardashian and Jenner family members for their business savvy and for becoming masters of the attention economy. It is no easy feat. At the same time, it absolutely disheartens me to think that most girls, boys, and adults are familiarized with a reality TV family, but may actually struggle to identify the names of prominent women in business, science and the arts. It is NOT NORMAL. We often hear the Marian Wright Edelman quote “you can’t be what you can’t see” and yet, the stories we are exposed to every day offer us an incredibly narrow view of what it means to be a woman in the 21st century. And what women’s aspirations should be.

Marian Wright Edelman is an advocate for children’s rights, the founder of the Children’s Defense Fund. There is another quote by her — albeit lesser known — that I deeply cherish: “If you don’t like the way the world is, you change it. You have an obligation to change it. You just do it one step at a time.”

I don’t like the culture of Instagram. How the most followed accounts are those of models, beauty “influencers” and entertainers — in the Instagram of my dreams, the most followed users would be activists like Malala Yousafzai or Greta Thunberg. I don’t like that Instagram is so focused on physical appearance, make-up, and consumerism. I’m concerned that the centrality of numbers — number of likes and of followers — is triggering comparison anxiety and a perpetual online popularity contest. I don’t like that the platform design normalizes narcissist behavior and oversharing of trivial things. I’m concerned that its popular VR filters may be creating body image issues for women and girls. I don’t like that it’s been identified as the most harmful social platform for mental health and yet the average user spends 53 minutes a day on it. That’s a full day a month. For all these reasons, I have been off Instagram since November 2016. I’ve been voicing my concerns about Instagram at Q&A sessions after screenings of my documentary The Illusionists. But its popularity is unquestionable: 1.1 billion people use Instagram every month. 38% of users check it multiple times a day, spending almost an hour a day on it, as previously mentioned. And there are some positive sides to it: it has given a voice and a community to people and groups that have been traditionally shunned by mainstream media. I’m thinking of people with visible differences, LGBTQIA+ folks, health at every size activists, to name a few. So is there anything, however small, I could do to try and influence the culture of Instagram? Just a little bit? Boycotting it and criticizing it have yielded no results these past 2 years.

10 days ago, a light bulb went off: I have two verified artist channels on GIPHY.com — the world’s largest repository of animated GIFs — which means that if I upload a sticker to GIPHY— i.e. a transparent GIF that plays on loop — it will show up in the search engine of Instagram Stories. That could be a very small first step.

A quick backstory: I’ve always been passionate about championing the visibility of women and minorities online. Starting in September 2017, I began creating animated GIFs of female and minority filmmakers, all with the same template: a photo of the director on set and superimposed on it the words “this is what a film director looks like” and the name of the director in big bold letters. In 2 years, I made almost 200 GIFs. This project, however modest, has changed the gender ratio in the online images of filmmakers. If you run a search for “cinematographer” or “film director” on GIPHY, Slack, or Twitter’s GIFs, you are likely to see dozens of my GIFs of female filmmakers — far outnumbering those of men. And these images have seeped into Google Search results, too, making women in film far more visible.

How to transpose this to Instagram? Well, 10 days ago I had a thought: what if I created an Instagram sticker that says “this is what a filmmaker looks like”, allowing ANY Instagram user to add it to their Instagram stories and direct messages? And what if I added other professions, too? CEO. Scientist. Author. Artist. What about other topics? The few Instagram accounts I genuinely like are those of book clubs, especially feminist book clubs. What if I also created a sticker that says “feminist book club”?

So I did. And what followed made my jaw drop. 3 days after posting the sticker “This is what a CEO looks like”, I found it trending on Instagram’s main GIF page. It got almost 25 million views in less than 24 hours. Interestingly, the Dashboard of my GIPHY page showed that “Feminist book club” is the second most popular sticker I made, with about 200,000 views in a week. It may not be much, but considering these stickers are competing with messages that say “Pizza” “So cute” and “I came, I saw, I grilled” — their rising popularity fills me with joy. 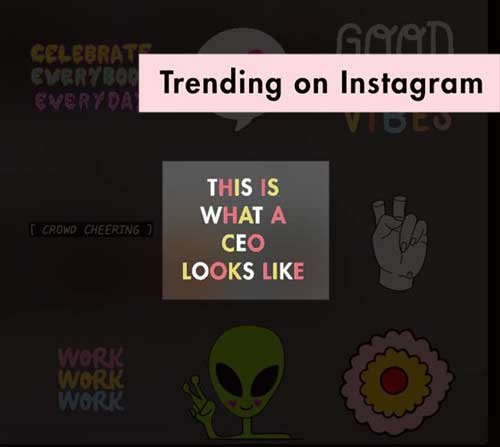 Instagram users who know of this project because of my Twitter posts have been using the stickers and tagging me in their Stories:

What truly excites me is imagining a young scientist taking a selfie in the lab, firing up Instagram, searching for “scientist” in the stickers tab and finding my animated GIF. Sharing her photo with the words “This is what a scientist looks like” sends out a powerful message to her friends and followers, promoting her visibility and championing her representation.

Our culture rarely celebrates the professional lives of women. This is my teeny tiny contribution, harnessing the popularity of Instagram to promote real life wonder women, in a world obsessed with models and entertainers.

I’m enjoying this project so much, I’ve been making new stickers every day.

Instagram has an article explaining how to add stickers to your Stories and messages. Read about it here. To use any of my stickers, simply type part of the message (for instance “author” “CEO” or “filmmaker”) and the sticker should show up at the top of search results.

If this project speaks to you, please share it with your friends. And if you use any of my Instagram stickers, please tag me (my IG username is: “elenarossini”) so I can see your posts and re-share them. Because #RepresentationMatters.

Kayleigh Donaldson: championing representation in the world of film