The images we are exposed to have a profound influence on the way we see the world – and ourselves. Marian Wright Edelman’s quote “If you can’t see it, you can’t be it” is often evoked in discussions about the lack of women in science and technology. The same could be said about the world of filmmaking: women make up only 7-9% of all hired directors in top grossing films. This percentage hasn’t improved in decades – if anything, things have gotten worse.

Since graduating from film school, my number one challenge as a working director has been the issue of credibility. Whenever I introduce myself and say that I am a filmmaker, the first follow up question is invariably: “Oh are you a film student?” or “Ah, what kind of little videos do you make?” At a professional conference not long ago, a woman actually asked me if I shoot my films on my iPhone. It was the proverbial straw that broke the camel’s back. I decided to be proactive, to speak up, and to engage in everyday actions that would promote the visibility of women directors.

?New project idea about how to harness the power of the internet to give more visibility to women directors. Watch this space ??

First up: I decided to populate GIPHY – an online database of animated GIFs – with images of women directors. Users of platforms like Twitter, Facebook, and Slack routinely use GIFs to illustrate their messages. Given the scarcity of animated GIFs showing female filmmakers, I thought I would do my part and make some available. The project debuted in September 2017 and it is already working: before, when you searched for “film director”, the first results would all be male directors like David Lynch, Alfred Hitchcock and Park Chan-Wook. I can proudly report that two months since the launch, now my GIF of Saudi director Haifaa al-Mansour is one of the top results. 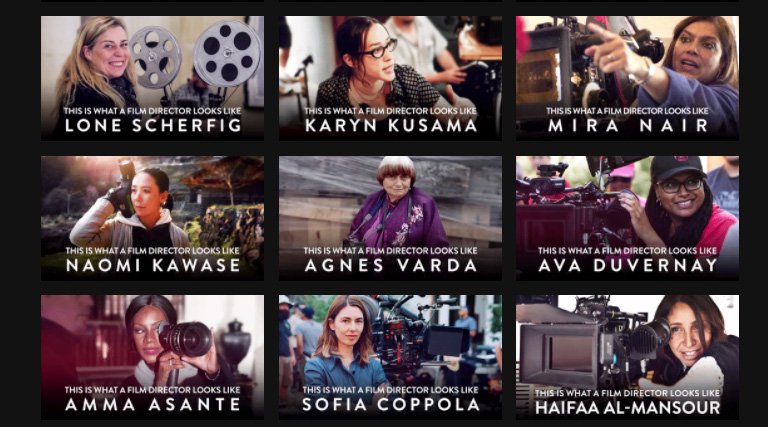 The project has also captured the attention of The Huffington Post (“This Director Is Creating GIFs Of Female Filmmakers To Show Representation Matters“) and A Plus (“Meet The Inspiring Woman Populating The Internet With GIFs Of Female Filmmakers“). The initial plan was to do about 30 GIFs, but the feedback online has been so positive, that I plan to carry on… until I reach at least 100, maybe more.

All the women director GIFs I’ve been making can be found on my GIPHY channel and on a brand new website I created: wearefilmdirectors.com

I find it crucial to promote the visibility of women directors in real life as well – not just online.

This past July, I had the opportunity to wear for the first time a t-shirt I had designed that carried the message: “This Is What a Film Director Looks Like.” I wore it on a job, while filming interviews with prominent angel investors and VCs. The experience was empowering and cathartic. For the first time, I didn’t feel like I was being underestimated. My job was spelled out on my t-shirt for the world to see and it gave me a boost of confidence… and an idea: how about designing a line of t-shirts that carry the names of my favorite film directors?

I remembered a t-shirt trend: a series of related first names, followed by ampersand, in the font Helvetica – and decided to adapt it, using names of women directors. The first edition celebrated Agnès Varda, Sofia Coppola, Ava DuVernay, Patty Jenkins and Jill Soloway. Because there are so many women in film I admire, I ended up creating 3 more series: with women directors and also advocates for diversity in film. 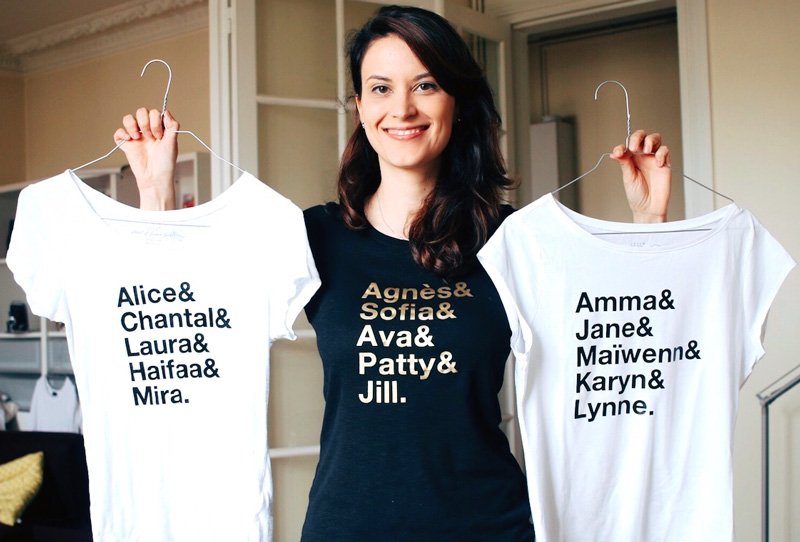 The feedback on Twitter was phenomenal – with supportive messages from the likes of Geena Davis and Jessica Chastain.

I must admit, receiving photos of people wearing them is the best feeling in the world.

A festival co-founded by a woman, co-directed by a woman, films made by women = cinema that is smart & provocative. #Telluride2017 @_elena pic.twitter.com/Fvf0xA5KrX

You can buy t-shirts and totebags with names of prominent women directors on my Zazzle page.

How many female directors can you name? I hope that my little efforts to increase the visibility of women directors will prompt you to seek out the work of women directors – and to support them. Watch their movies, recommend them to your friends. If you’re out of ideas, you can start with Greta Gerwig’s Lady Bird (released in theaters on November 3rd), Ava DuVernay’s powerful documentary 13th (available on Netflix), or Karyn Kusama’s haunting thriller The Invitation (Netflix).

One of my favorite quotes, by late film producer Laura Ziskin:

Men have built the cities, made and defined the culture, interpreted the world. At no time in recorded history have women been culture-makers. Movies are arguably the most influential, important medium in the world. Because women are now making movies, then women’s ideas, philosophy, point of view will seep into that culture. And that’s never happened in history. We can’t even see the impact of that yet.