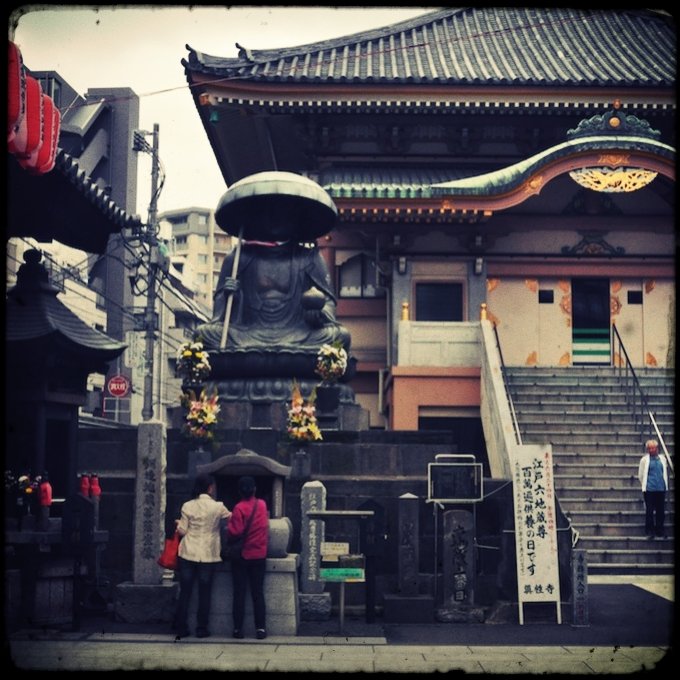 I just returned to Paris after a 10-day stay in Tokyo, Japan, where I filmed key sequences and interviews for my feature-length documentary The Illusionists.

Simply put, I had the time of my life. So much so that I miss Tokyo, Japan and the Japanese in an almost visceral way and I’m constantly daydreaming about finding a way to spend part of the year there – on a regular basis. I experienced a calm, serenity and sense of connection there that I hadn’t felt in ages and carry enormous respect and admiration for the innate elegance, dignity and utmost civility of the Japanese. That said, there were low times in Tokyo, a low time to be precise: a rather traumatizing incident involving my gear.

Saturday June 9th – aka day 5 in Tokyo. I’m roaming around Shinjuku station with my assistant, looking for a place to eat, before setting off to film in Roppongi. I’ve been on an involuntary diet since arriving in Japan, feeling lightheaded and drooling at the thought of a copious meal. I’ve been a strict vegetarian for 17 years and finding a fish-free, meat-free dish in Japan is often really complicated or downright impossible. Imagine my delight when I see an Italian restaurant showcasing pictures of big pizzas and pasta dishes. I have to contain myself and try really hard not to run into the restaurant.

My assistant and I are assigned a seat in the back. I put the backpack containing my Canon 5D Mark II and an extra lens on the bench, right next to me. After placing the order, as I bend down to move the umbrella, I hear a shuffling noise and an incredibly loud thump. The entire restaurant turns to look in my direction. The backpack had slid down and fallen to the floor, smacking against the metallic frame of the table. My heart stops.

This is the first time ever that something like this has happened: from computers to smartphones, video and photo equipment, I have a tendency to care for my gear in an almost reverential way and after years of use, you can barely see a scratch on my equipment. Moreover, my Canon 5D Mark II gets a very special treatment. I’ve had it for two years but I still use it exclusively for filming: I don’t dare to take it out with me for photo projects, opting instead to use a Nikon DSLR.

I have a small collection of camera bags and suitcases that usually carry the 5D. On occasion, I would put it in a specially outfitted backpack, while filming around a city on the fly. Like this day. I am now cursing my carelessness.

After the fall, my first thought: what am I going to do, I still have four interviews to film and I haven’t even been to Akihabara yet! Tokyo trip = ruined.

I do a quick mental tally, trying to figure out how many hundreds of thousands of yen it would take to replace my gear. Because what if I broke the 5D AND my 80-200mm lens? I unzip the backpack and reach for the 5D, which is resting around a thick towel and is additionally wrapped inside two really thick scarves. I feel with my hand the Nikkor 80-200mm lens loose inside the scarf. It has snapped off the 5D! I carefully unwrap the camera and lens and see to my horror that the Novoflex adapter – connecting the Canon body and Nikkor lens – has broken off in two pieces: one is still attached to the 5D, while the other is on the lens. My heart is jumping outside my body.

I try to unscrew the adapter from the 5D, but it’s too tightly wound. I ask my assistant to press with his finger on the release key while I try again. After some struggle it comes off. I immediately put my Canon 50mm 1.4 lens on the 5D and check if the camera works. To my relief, everything seems fine.

Next: the Nikkor 80-200mm lens. It’s my workhorse and best investment ever: only 160 Euros, second-hand. I have come to depend on it for 70% of film shoots. No way to test it, since the Novoflex adapter is broken. I will have to wait till my return to the hotel, where I left a Nikon camera body.

A wave of panic comes rushing back: what am I going to do now, since I only have one Canon lens (the 50mm) and three Nikkor ones that are unusable because of the broken adapter? On occasion I have filmed entire projects with just one 50mm lens, but not the Canon one. A Nikkor 50mm 1.8 AIS which is 32 years old and provides stunning grain. I’d take an old manual Nikkor over a brand new AF Canon any day. The difference is huge, especially while doing video, as you can physically stop down Nikkor AI and AIS lenses (as opposed to doing it mechanically, turning the dial of the camera body, for brand new autofocus lenses). The thought of filming the rest of the Tokyo sequences with the Canon 50mm makes my heart sink.

My assistant tries to reason with me, suggesting I find another adapter. Problem is: buying it the first time around was rather complicated. It involved an eBay auction and the item came from a vendor in Germany two weeks after the order. I suppose camera companies are not so happy about having people use one manufacturer’s lens on another’s camera. It’s Saturday and I have two interviews on Sunday, one on Monday and another on Tuesday. Not to mention a tight schedule involving B-roll in various neighborhoods. I need the adapter NOW.

I vaguely remember seeing in my Lonely Planet guidebook various suggestions about camera shops in Shinjuku. So, I frantically pour over the guidebook as my pasta dish is getting cold in front of my eyes and I find the following description:

Yodobashi Camera. The store stocks anything from digital camcorders to secondhand enlargers. Prices at Yodobashi are very competitive, and if you can’t dig it up here then it probably can’t be found in Japan.

Most people in Japan speak very little English and on my first day in Tokyo it had taken me 20 minutes and endless conversations with three salesclerks to make them understand I needed a travel plug adapter. Things go very differently at Yodobashi. After greeting the salesclerk in Japanese, I make a circle with my hands and go, “Canon camera. Nikon lens. Adapter?”

The salesclerk, a bubbly 20-something woman standing by pro camera equipment, writes down on her notebook, repeats my question, and goes to ask for assistance to one of her colleagues. I’m escorted to the second floor, where, to my delight, I see an entire array of lens adapters. Including the very same Novoflex model that had just broken. The price? Exactly the same one I paid in Europe, around 190 dollars. I tell the salesclerk: “You saved my life!” and she repeats the sentence word for word, with an interrogative tone: “You saved my life?” This goes beyond her grasp of English, so I flash her a huge smile and two thumbs up, repeating “Arigatou gozaimasu” multiple times.

Only in Tokyo could I have such a freak accident and find the solution to my camera problems so effortlessly, five minutes away from where I am. Had the same thing happened in any other location I had traveled to for the film – Boston, London, Milan, Beirut – I don’t know what I would have done.

Following the accident and the trip to Yodobashi, I started employing a new method for carrying around the equipment: I would put a heavy duty protective, padded camera bag INSIDE my backpack. Gently putting it on the floor whenever I made a stop. Lesson learned.

The rest of the trip went off without a glitch and I came home with some 250 GB (600 GB in Pro Res) of footage, including 310 clips of city life and six interviews.

Lessons from Fellini (Part Two) – On Creative Freedom, Money and the American Dream