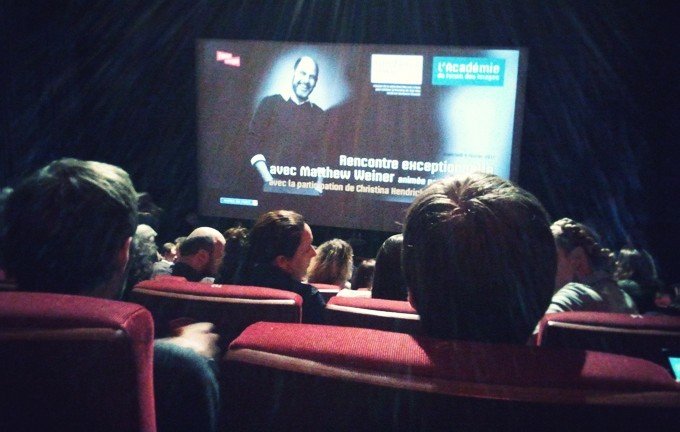 This past week I’ve been working on a full Feng Shui makeover of my office, filing away papers that had accumulated over the past two years. I found over a dozen Moleskin soft notebooks, some dating back to 2008, which I had been carrying with me everywhere, scribbling down to do lists, notes from events, gallery exhibits, and highlights from books I’ve been reading.

Revisiting these notebooks has been like going through a time machine.

Amongst the gems I found, were notes from a February 2011 masterclass with MAD MEN creator Matthew Weiner.

Weiner visited Paris’ Forum des Images along with actors John Slattery and Christina Hendricks. The masterclass was absolutely riveting. Weiner regaled the audience with anecdotes from the early days of Mad Men. The lesson? Perseverance pays off.

Highlights from my notes:

– Weiner said that David Chase – creator of HBO’s cult show The Sopranos, for whom he worked – had his first big success at age 55.

– Humphrey Bogart had his first speaking part at age 42.

– Weiner himself faced many obstacles and rejections for many, many years in Hollywood. He worked on the pilot for MAD MEN on the last two seasons of The Sopranos, using the show’s crew.

– Weiner proposed the show to Showtime and HBO. They passed.

– AMC couldn’t get funding for MAD MEN because everybody thought the show wouldn’t have international appeal.

– AMC eventually took a chance, putting up 3 million dollars for the show’s pilot.

– To put things in perspective, the pilots for LOST and Boardwalk Empire cost 12 million and 15 million dollars, respectively.

– The crew for MAD MEN’s pilot thought it was the best show they’d ever done. Paid stuff out of their own pockets.

– The critical reception were incredible.

– Still, Christina Hendricks’ agent dropped her – thought that work on MAD MEN was a waste of time and wanted her to take a network job.

– Weiner was influenced by director Wong-Kar Wai, showing characters from behind.

– Weiner loves Antonioni‘s “La Notte” – he finds it incredible to have a whole film that rests on the question: “Why doesn’t my lover look at me the way he used to?” As opposed to “How do we get the gold out of Cairo?”

– Weiner made everybody watch Chabrol‘s “Les Bonnes Femmes” – the characters feel like real people, as opposed to Hollywood characters, who are too stylized. He urged the crew not to fix imperfections in the sets and costumes. “I want to see the ugliness of life that we don’t see.”

– Speaking of the 1960s vs. today, Weiner said that “whatever has changed, human nature has not changed.” It’s about the experience of the other. The default setting is white men vs. the rest. People bonding over hating someone else (racism, sexism…)

– On MAD MEN, Weiner has many first time writers and directors. He concluded the masterclass by saying, “I like to give people a chance.”