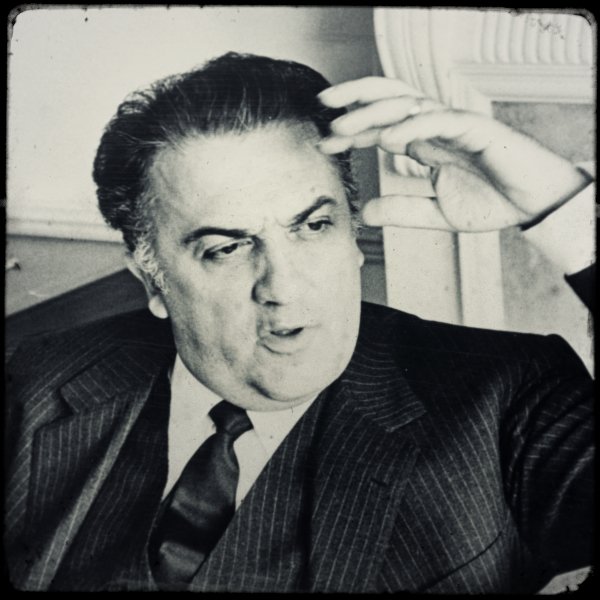 I’m sitting at my desk in my family home in Northern Italy, surrounded by artifacts from my early days of filmmaking. Stacks of MiniDV tapes from a film shoot in Tokyo. A framed pictured of Sofia Coppola on the cover of The New York Times Magazine. Tomes from film school (Bordwell’s “Film Art: An Introduction,” Weston’s “Directing Actors“) as well as “Trier on Von Trier,” “Cassavetes on Cassavetes” and various books on and by Bertolt Brecht. I like to browse through these books, trying to recapture the idealism and pluck of earlier days, especially when I’m facing important decisions.

I pick off a shelf “I, Fellini” by Charlotte Chandler – a wonderful biography of the director, with first person narrations by him, put together over the course of a 14-year-long friendship. I jump to the chapter about “8 1/2” and here is what I find: the words I needed to hear.

After La Dolce Vita was my moment in life to make a lot of money, if that was what I wanted, or to make a lot of films, if that was what I wanted. The only problem was that I couldn’t make the film I wanted at any price, and I would not compromise. […] And I had no idea that my moment had arrived, that it would not come again, nor that it would last only such a brief time. I wasted time being resentful because I had been paid so little for La Dolce Vita, and resentment saps energy. Then I regretted being resentful, and regret saps energy. […] Not knowing that I would never again have that moment in time had two disadvantages: I did not use it sufficiently, nor did I enjoy it enough. But it had one advantage: I enjoyed it in the carefree way that is best, when life is eternal and death is for other people. When what is precious is too tightly held, it is strangled.”

There are lots of other philosophical reflections in “I, Fellini” – along with a multitude of juicy anecdotes and profound insights on the art of filmmaking. It’s almost more illuminating than four years of film school.

Pictures do not get easier for me to make, but more difficult. With each one, I learn more of what can go wrong, and I am thus more threatened. It’s always satisfying when you can turn something that goes wrong into something that is even better. If I saw that an actor like Broderick Crawford was a little drunk on the set, I tried to make it part of the story. […] When I cannot correct the problem, I incorporate it. I realize that the dream cannot be touched, that the picture in my mind will never quite be the one on the screen. One must learn to live with the acceptance of that.

Links:
– “I, Fellini” by Charlotte Chandler on Amazon